Sleeping in late, big fat newspapers full of extra weekend sections, a stroll in the park if it’s sunny and a good book or a film if it’s not… ah, the ingredients of the classic British Sunday – with just one thing missing. 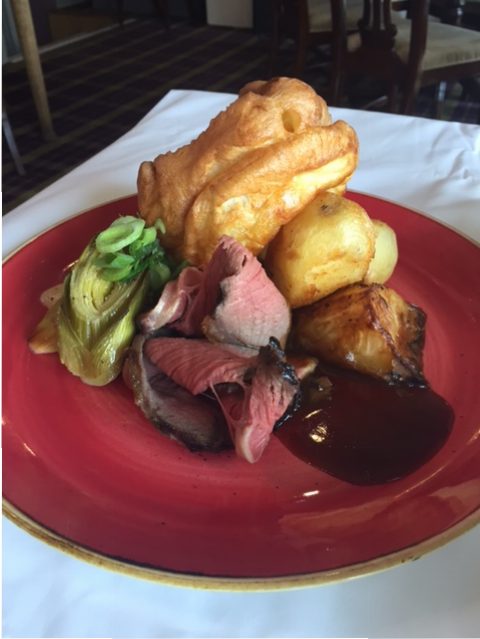 Cook those potatoes and stuff those turkeys! It’s time to cut into the classic British Sunday roast lunch!

Where the roast began

Ask anyone in the UK what the words ‘Sunday roast’ mean to them, and they’ll probably take you back to their grandmother’s dining room – maybe with a few tales of overcooked cabbage and cold mashed potato!

But the Sunday roast (also known as Sunday lunch or Sunday dinner) really goes back to the days when most people went to church on a Sunday morning. Traditionally, people would fast beforehand and leave the meat in the oven to cook while they were at the service. That way, they knew they had a big, juicy, fully roasted lunch waiting for them as a reward when they got home.

A different story suggests the Sunday roast began in Medieval times. Peasants would serve the head of the village (the ‘squire’) all week, until it was the squire’s turn to serve everyone a huge roast dinner on Sundays – while they enjoyed sports such as wrestling, sword-fighting and boxing. Ah, the good old days…

What’s in the roast?

Potatoes, vegetables and meat – everyone in the UK knows the key features of the biggest, slowest meal of the week. But there are still many variations.

Should the potatoes be boiled, roasted or mashed?

Should the meat be chicken, beef, pork or lamb? Or even a nut roast, for the vegetarians in the family?

And what about those vegetables and side dishes?

To avoid arguments, let’s look at all the key parts of the Sunday roast…

The main event of the roast lunch can be any big piece of meat you like – the classics are a whole chicken or cut of beef, lamb or pork, but alternatives such as turkey, pheasant or rabbit can also be served.

Don’t worry if you’re vegetarian. Nut roast – a loaf of vegetables, nuts and breadcrumbs – is a delicious substitute.

If one roast animal isn’t quite enough, try the ‘Royal roast’ – a turkey filled with all sorts of other meats including grouse, pheasant, partridge and deer.

Of course, most people don’t need to eat a full farmyard to feel completely ‘stuffed’ – a touch of traditional ‘stuffing’ is usually enough. This is normally sausage meat mixed with herbs, fruits or nuts. It is cooked inside the main roast meat, or as a side dish.

Potatoes – also known as ‘spuds’ or ‘tatties’, depending where you are in the UK – are essential.

Roast potatoes are many people’s top choice. However, there’s quite a technique to getting them right – they should be crisp on the outside and fluffy on the inside. Some decide it’s easier to mash the potatoes (sometimes together with sweet potato, garlic, cream or horseradish – or with kale or cabbage to make the traditional Irish ‘colcannon’). More health-conscious Sunday lunchers stick to boiled potatoes.

Other than that, the options are endless. Carrots, parsnips and onions are typical, but you can also find turnip, swede, peas, beans, sweet potato, beetroot or broccoli. If you want to be really traditional, go for Brussels sprouts. People either love Brussels sprouts or hate them – according to a poll by the food company Birds Eye, sprouts are the most hated vegetable in Britain, but we at Education UK can’t get enough of these little green delights!

Gravy appears on most Sunday lunch tables – a rich sauce made from the meat juices. Some people will also serve certain sauces with certain meats, such as mint sauce with lamb and apple sauce with pork. ‘Bread sauce’ is sometimes served with chicken or turkey – this is a creamy sauce thickened with bread.

The final touch is the Yorkshire pudding. You might have heard people in the UK use the word ‘pudding’ to mean ‘dessert’, but forget sweet stuff when it comes to your ‘Yorkies’. These are made from savoury batter – like crispy, edible bowls for extra gravy!

The lunch that lasts till Tuesday

One of the best things about a roast is the leftovers.

Why not try ’bubble and squeak’ on Monday night? This is a big pancake-like dish made from every bit of leftover food you can imagine: sprouts, potatoes, cabbage, carrots, and maybe a bit of bacon.

How about making sliced beef sandwiches for lunch? Or adding chunks of pork to a casserole? Even when you’re sure you’ve finished every last bit, you can boil any leftover bones along with some vegetables, onions, salt and pepper to make a delicious soup.

If it sounds complicated, just remember: the Sunday roast is designed to be a lazy, easy meal. Most roasts can be put in the oven and left to cook for a few hours. The BBC’s Good Food website has a handy roast timer to help you work out how long you should cook meat by weight and type.

For a more step-by-step approach, follow celebrity chef Jamie Oliver’s advice. His Home Cooking Skills site offers tips for cooking the perfect roast chicken (with pictures, so you don’t get lost) and roast vegetables and potatoes. There are also instructions on how to make gravy and the best British bread sauce (now, there’s a tongue-twister!).

For more tips, try searching online for ‘Sunday roast recipes’ – or check out the roast collection at BBC Good Food.

No, seriously, I can’t cook

Sounds like you need some help from that other great British institution – we’re talking, of course, about the pub.

Sunday Lunch at the Angel Inn 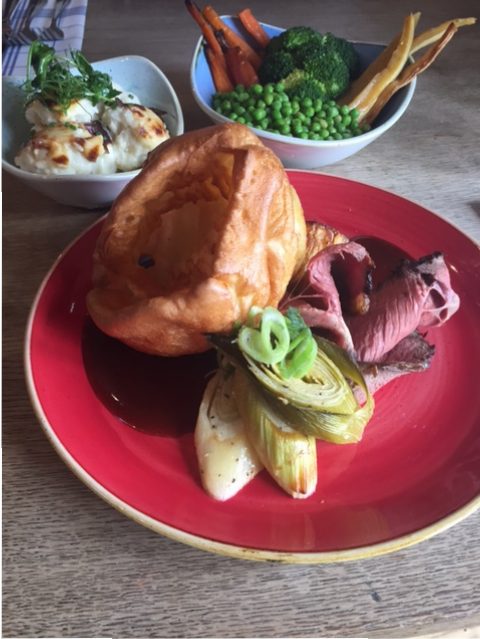